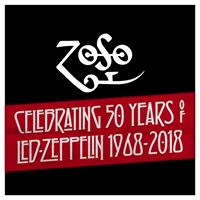 Zoso – The Ultimate Led Zeppelin Experience formed in 1995 to perform the most accurate and captivating Led Zeppelin live show since the real thing. For Zoso, it’s much more than just being a tribute. It’s about touching a golden era in music. Zoso embodies Page, Plant, Bonham and Jones in their spirit, tightly­ wound talent and authenticity.

Each band member has been carefully selected to portray both the appearance and playing styles of their Led Zeppelin counterparts. In eighteen successful years of touring, they have perfected their art. As one of the longest tenured Zeppelin tributes, Zoso’s 2400 live shows around the world, including a slot at Bonnaroo in 2003, have established them as the most traveled and successful band in the market.

Zoso’s live shows are not about simply playing the right notes, they are about aura and feeling, harkening back to the unique atmosphere Led Zeppelin created. It’s in the way they play: Each band member’s mastery of authentic vintage instruments coupled with spot­on vocals, guitar, bass, drums, and keyboards, their compelling stage persona and distinct Led Zeppelin sound, with astounding visual imagery recreates the music, magic, and mystery of a Zeppelin concert. The impact is so powerful that band members constantly hear from young rockers that they were the catalyst behind turning them into new, die­hard Zeppelin fans.

Their passion, musical ability, showmanship and precise attention to detail earned them critical acclaim, name recognition and a loyal national following. The Los Angeles Times hailed the group as being “head and shoulders above all other Zeppelin tributes,” and the Chicago Sun­Times declared Zoso is “the closest to the original of any tribute.”
If you missed Led Zeppelin live in the 70’s or are looking to relive the “Hammer of the Gods” phenomenon, you must experience what the St. Petersburg Times calls “the most exacting of the Zeppelin tribute bands in existence.” Visit Zoso Website

Harry started out playing guitar in various NY bands in the late 70’s. Later, in 1980 he relocated to Northern California where he has continued to be a fixture in the Sonoma, Marin and SF Bay Area Music Scenes for over 30 years, playing guitar and writing songs for such bands as Scorpio, Mantis the Band, The Tumblers, Broken Ties, Lovetribe, Plastic, The Threetles, The Oakley Krieger Band, Stu Blank, The Gluttons of Symphony and also with third wave surf band North of Malibu.

Some of Harry’s guitar work can be heard (but not credited) on the Jellyfish box set; Fan Club, (On 2 songs; Best Friend & Sebrina, Paste & Plato), he formed The Gluttons of Symphony for a version of All is Forgiven on the Burning Sky Records, Jellyfish tribute CD; Sensory Lullabies.

For the last 25+ yrs Harry has owned and operated www.route44studio.com and continues to work with a long client list of Local and International artists recording, mixing & producing music.

Most recently, Harry has been putting together his first solo album (Time & Space on Jackalope Records) which highlights his songwriting and playing as well as finally taking his place in Rock & Roll as an artist in his own right.

Big Rock is the newly formed band which will support this album live.
From their previous band Lovetribe, Dave Ray Burke can be heard delivering noteworthy vocals and guitar. New to the lineup is drummer Justin Shannon whose hard rockin’ tracks can be heard on most of the album’s offerings. Luie Medina, Shannon Rider, Curt Young, Spike Sikes will also be teaming up to deliver an All-star lineup for the live shows, set to launch this spring.

If you enjoy Classic Original Rock & Roll with a no nonsense approach, then there will definitely be something good waiting for you at a Big Rock show. See Rock Revival’s Website