Union Jack and the Rippers with special guests Ancient Mariner and Incredulous!

Artists: Union Jack and the Rippers and Ancient Mariner
Postponed until 2022 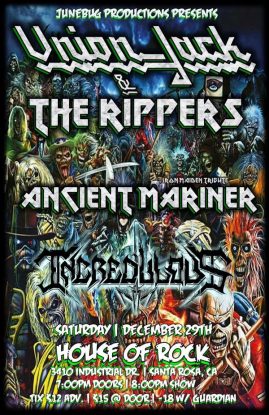 Union Jack and the Rippers

The set list is made up of not just the hits from your favorite British Heavy Metal bands, but the deep tracks you listened to that really made you feel connected to the music, the songs that made you a true fan.

Because of the depth of experience of each band member, the first rehearsal was unbelievable. Each player contributes impressive skill, professionalism and commitment not just to the band but to every song they play. The group gelled from day one and the buzz began. more >>>

Ancient Mariner unleashes the full power, performance, and style of a classic Iron Maiden concert: the smoke, the lights, the voice, Eddie and the spandex! The only difference? Everyone has a front row seat. With the soaring vocals of Mark “Bruce Bruce” Meritt and the thundering, machine gun bass of Tom ” Hammer Harris” Gears, Ancient Mariner makes each performance unique with a staggeringly deep catalogue of songs. Ranging from the anthemic Flight Of Icarus to virtually unplayed Loneliness Of The Long Distance Runner, Ancient Mariner is the metal tribute not to be missed!

Ancient Mariner performs over 30 classic and deep tracks from the legendary Iron Maiden, and every show is a different selection of songs so you can see us over and over again. more >>>

About
We’re a Bay Area thrash metal group looking to do nothing more than roar out some tunes.

Biography
Formed in late 2014, in Sebastopol, CA, by two teenage guitarists. The guitarists’ names were Branden Carell and Forest Giulietti. They had been jamming on some guitar riffs they had separately written here and there. They had the idea of starting a thrash metal project, slowly writing material and finding the sound they were looking for. In late 2016, after a fair amount of tuning, tweaking, and member swapping, they were put in touch with bassist James Giant and drummer Rafael Bañuelos. After working together, and with additional members, they settled with the configuration that is Incredulous. more >>>