The Atomic Punks and more TBD! 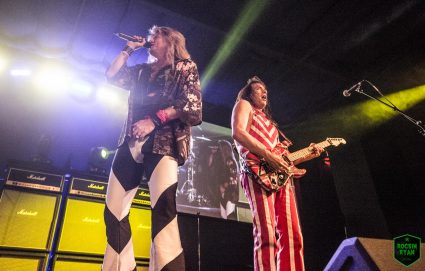 The Atomic Punks have been the Undisputed #1 tribute to the Mighty Van Halen for 25 years. The only VH Tribute actually endorsed by members of Van Halen.

The Atomic Punks are a tribute to early Van Halen, the David Lee Roth era.

Formed in 1994, the Atomic Punks have performed well over 2500 shows throughout the United States. Globally know as the Worlds “Greatest” tribute to David Lee Roth era Van Halen, the Atomic Punks have an International following that continues to grow every year. Van Halen themselves have endorsed the Atomic Punks! In his 1997 auto-biography “Crazy from the Heat,” Van Halen frontman David Lee Roth referred to the Atomic Punks as “The best tribute to Van Halen EVER!” Dave cemented his admiration and appreciation for the Punks’ talents by hiring original axeman Bart Walsh to play guitar on his “DLR Band” tours from 1999-2001. Bart’s replacement, Brian Young, recreated Eddie Van Halen’s sound and furious guitar playing so precisely, that Dave again looked to the Punks, and took the guitarist out on the road in 2002 for his national tour with fellow ex-Van Halen frontman, Sammy Hagar. Van Halen bassist Michael Anthony has performed sets with the Atomic Punks on three different occasions. In 1997 in Pasadena, CA. he said “I feel like I am back in 1982 performing with the old band!” Anthony joined the band again on stage, at the House of Blues in Anaheim, CA on January 31, 2003. He played nine Van Halen classics with the band including, “Runnin’ With The Devil,” “Hot For Teacher,” “Somebody Get Me A Doctor,” “Light Up The Sky,” “You Really Got Me,” “Panama,” “Bottoms Up!,” “Mean Street,” and “On Fire.”

Nationally syndicated radio host Howard Stern stated on his show, “The Atomic Punks become Van Halen. It’s the total experience, they do Van Halen better than Van Halen themselves!” Atomic Punks fans boast that Brian’s recreation of David Lee Roth’s live persona is so uncanny, it must be witnessed to be believed. From Dave’s trademark costumes, to his signature scream and unique vocal delivery, Brian does Dave proud as the ultimate tribute to one of rock’s greatest frontmen. Current guitarist Lance Turner recreates Eddie Van Halen’s classic guitar sound, playing every riff and solo with as much energy and technique as Edward himself, while capturing all of the enthusiasm and flash of Ed’s engaging live personality. Original Punks members, Joe Lester (bass), and Scott Patterson (drums), make up a rhythm section that is unmatched by any other Tribute, providing the same rock-solid foundation and pulse for Lance and Brian as Van Halen’s own Michael Anthony and Alex Van Halen did for Eddie and Dave. Joe and Lance also help add all the signature backing vocals to the early Van Halen masterpieces they play. There is one important point the band always makes clear at their shows. The Atomic Punks don’t think they are Van Halen, they simply love to play old Van Halen and it shows in their amazingly realistic, power-packed stage show. Anyone can go out and have a costume made and try and replicate the look, but no Van Halen tribute band captures the note for note performance and feel of an old VH show like the Atomic Punks. If you love vintage Van Halen, and wish you could experience and relive the energy the “Mighty” VH created with “Diamond” Dave behind the mic, you do not want to miss the Atomic Punks. They are the ultimate tribute to early Van Halen! 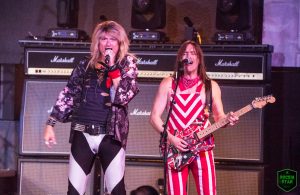 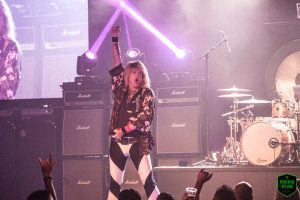