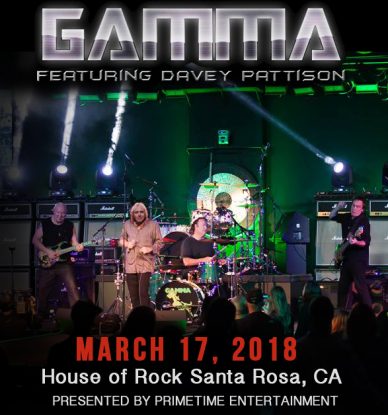 Davey was invited to the United States from his native Scotland in 1979 by the late Bill Graham to front the band “GAMMA” then being put together by guitarist Ronnie Montrose – “I’d given up all hope of finding a quality singer for GAMMA until I heard Davey Pattison.” (Montrose quoted in the Detroit News).  Davey arrived with a notebook full of Iyrics and began co-writing the GAMMA hits, “Thunder & Lightning”, “No Tears” and “Razor King” for the band’s first album. Two more albums followed and Davey again co-wrote, most notably, the now classic GAMMA song “Voyager”. Major stadium and arena concerts followed as GAMMA was paired with major rock acts like AC/DC, Santana, ZZ Top, Journey, Toto and Foreigner. Davey Pattison and GAMMA had entered the world of big time Rock and Roll.

After years of success, like many bands, GAMMA’s members went their separate ways and in 1986 Davey was approached by his old friend Robin Trower who asked him to perform on his forthcoming album “PASSION”. “Trower’s “PASSION” not only shows off his guitar playing but showcases the talents of the group’s vocalist. Davey Pattison. who brought the house down with ” ‘PASSlON’s’ title track.” (Larry Snider, music director at KXIX, Seattle. “Trower’s guitar playing is topped off by a delicious peformance by one of the unsung talents of our time – former GAMMA front man. Davey Pattison” – Kerrang Magazine, U.K. (The British “Rolling Stone”)

Davey continued his work with Trower playing to sold out venues across the United States and Canada. Two years later the album “TAKE WHAT YOU NEED” was released, again to critical acclaim, and the hit single “TEAR IT UP” was aired on radio stations from coast to coast. In 1990, Atlantic Records released “IN THE LINE OF FIRE” – “Now more than ever. Trower’s music takes on a quality that’s testament to Pattison’s influence on the material” (Kerrang Magazine.) – “Surely now Pattison must be considered as one of the world’s top ten best singers.” (Kerrang Magazine). 1992 saw the release of the album “BEST OF GAMMA” and record sales soared. Davey reunited with Ronnie Montrose to tour in support of the album. Live shows received high praise from fans and critics alike