Artists: FAITHFULLY - Reliving the Glory Days of Journey and VSquared
Postponed until 2022 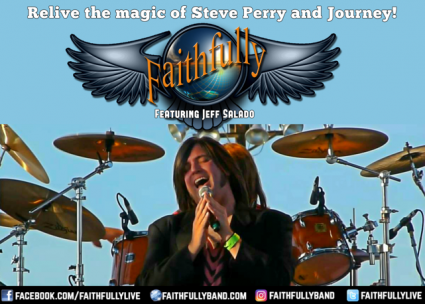 Benefit Concert Weekend for the Anova School for Autism and Learning Differences on Friday, September 29 and Saturday, September 30, 2017.

All ticket sales for the weekend donated to the ANOVA School for Autism and Learning Differences to help them build a much needed, playground for ANOVA students.

Special Offer! >>> Every ticket purchased receives a FREE copy of the Sony/RED international release THE BEGINNING by V². THE BEGINNING is a 2-disc, CD and DVD set featuring a amazing 3-D lenticular cover a DVD of live concert footage, a documentary, interviews and more!

Journey dominated arenas worldwide in the late 70s, 80s, and the amazing comeback in the mid-90s. What if you could see a band like that again? Journey still tours, but for those longing for the “voice” of the band that was fronted by Steve Perry back in the day should now treat yourself to FAITHFULLY – “Reliving the Glory Days of Journey” – a concert re-creation of the band covering its greatest smash hits from 1978-1996.