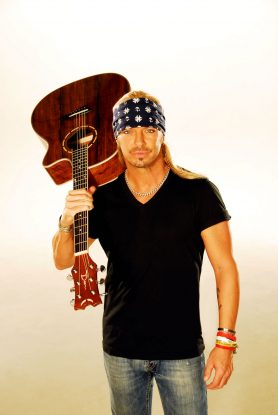 Michaels first rose to fame as the frontman of Poison. As one of rock’s most iconic and enduring bands, Poison defined the fast, gritty, and glamorous rock ‘n’ roll scene. Since the band’s beginning, Poison has achieved massive success- releasing eight studio albums, four live albums, and selling over 30 million records worldwide and 16.5 million records in the U.S. alone.

The band has charted 10 singles in the Top 40 on Billboard’s Hot 100 including the number-one single, “Every Rose Has It’s Thorn.” Twenty-five years after their debut, Poison is still recording music and performing together.

Bret Michaels’ solo career has been equally successful: his most recent solo album, “Custom Built,” released in July of 2010, topped the charts, reaching #1 on Billboard’s Hard Rock list. His current solo tour, “Get Your Rock On” is selling out arenas across the country and his forthcoming solo album of the same name will be released this summer.