Aerocksmith with special guest Union Jack and the Rippers

Artists: Aerocksmith and Union Jack and the Rippers
Postponed until 2022 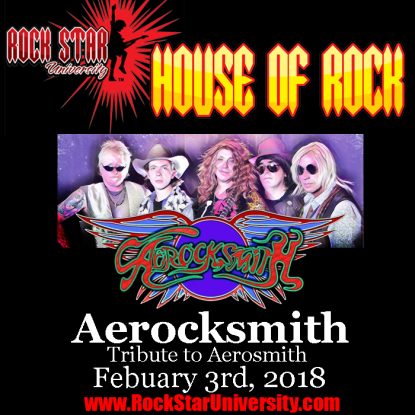 The Bay areas one and only Aerosmith Tribute band!
Covering all the hits, spanning the 70’s, 80’s and 90’s eras.
Be prepared to be blown away by Aerocksmith and experience
the music of the Bad Boys of Boston.
The Toxic Twins are coming at you live!
Mama Kin
Same Old Song
Toys in the Attic
Dream On
Train Kept a rolling
Walk this way
Sweet Emotion
Back in the Saddle
Sick as a Dog
Last Child
Draw the Line
Kings & Queens
Remember Walking in the Sand
Big Ten Inch
Come together
No More No More
Pink
Other side
Livin on the Edge
Love in an Elevator
Dude looks like a Lady
What it takes
Eat the Rich and More!!!!!!!

Union Jack and the Rippers:

Formed in 2016, Union Jack and the Rippers is bringing the New Wave of British Heavy Metal (NWOBHM) to Northern California. Guitarist Kiyoshi Morgan (Vicious Rumors) pulled together five talented musicians with years of experience to create one of the North Bay’s best Heavy Metal cover bands. Union Jack and the Rippers covers favorites from bands like Judas Priest, Iron Maiden, Motorhead, Saxon, Angel Witch, Def Leppard and Diamond Head.
The set list is made up of not just the hits from your favorite British Heavy Metal bands, but the deep tracks you listened to that really made you feel connected to the music, the songs that made you a true fan.
Because of the depth of experience of each band member, the first rehearsal was unbelievable. Each player contributes impressive skill, professionalism and commitment not just to the band but to every song they play. The group gelled from day one and the buzz began