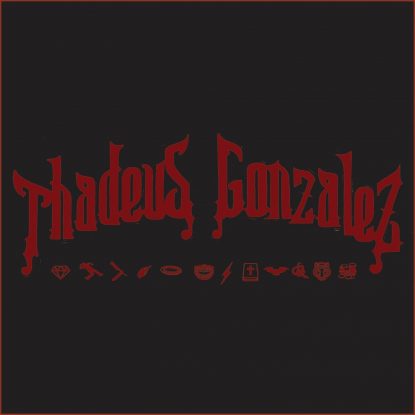 Oakland-based singer/songwriter Thadeus Gonzalez has earned international critical acclaim and has been called “a front man to watch” with “an arena looking andsounding attitude.”

Thadeus has fronted several bands within the Oakland-San Francisco Bay Area. In 2010 he started opening various high-profile gigs throughout the west coast and achieving commendable radio and video play before pursuing a solo career with Thadeus Gonzalez in 2014.

A credible songwriter and guitar player, Thadeus released his debut solo record, “Utopian Society” in 2014. The title track demonstrates total rock bombast; alt and punk influences come through in “Your Needle Scratches My Vinyl” and “Literally.” While the lyrics are evocative and unusual, Gonzalez’s unique writing style is most evident in the sexy, moody “Our Connection” and the vulnerably revealing ballad, “White.” Typical review: “Around each corner a total surprise, which keeps “Utopian Society” fresh and relevant sounding from track to track.”

In 2017 Thadeus Gonzalez was signed to Spectra Music Group and his second solo record, Silver Inside, was released in January 2018. The first single, also titled Silver Inside, has enjoyed a phenomenal amount of attention with national radio and video play.

Thadeus has opened for KISS, Motley Crue, Slash and in 2017, Bon Jovi at the SAP Center in San Jose.