ZED, The Watchers and Thadeus Gonzalez! 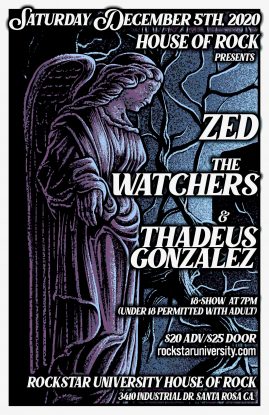 3 of the Bay Area’s Best Hard Rock/ Metal bands together for 1 night of amazing music!!! Saturday September 5th! Right here at the House Of Rock! Don’t miss it!

ZED has been making their roaring presence felt in the Bay Area rock scene since 2007 with heavy footprints and sonically indelible marks are San Jose earth shakers ZED. With a sound based on the core principles of blues, heaviness, groove, and feel, this quartet is the genuine article. No bell bottoms, wizard sleeves, or hip huggers for this crew. Instead, it’s a barrage of head-bobbing, air-guitaring, hip-shaking, blues-driven riffage as delivered by the bastards of rock & roll.
From their inception ZED made a name for themselves with their crushing live shows and incessant grooves. Having played together in various projects since 1998, including releasing several albums with the band Stitch for Prosthetic and Metal Blade Records, guitarist/vocalist Peter Sattari and bassist Mark Aceves joined up with guitar wizard Greg Lopez and drummer extraordinaire Sean Boyles in order to create a sound that was uniquely their own, whose sole purpose was to rock. Drawing from their varied influences, ranging from classic ’70s rock to punk and hardcore by way of metal and old school funk, ZED writes music fueled by nasty grooves. The band has been called “a pissed off Led Zeppelin with Chris Cornell meets Ian Astbury on vocals.”
In recent years the bands momentum has exploded, signing to Ripple Music and growing into a household name in the stoner rock community. Their hard-grooving live show has seen the band perform as headliner support at Maryland Doom Fest and numerous SXSW events. Now as ZED prepares to re-issue their classic sophomore record Desperation Blues and release their next full length, they are eagerly anticipating their first European tour, built around what promises to be a benchmark performance at Desertfest London. No matter the consequences, ZED will rumble on!

“Crunchy riffs, melodic vocals, and a stoner attitude, they come at you like a full-on Harley Davidson storming down the highway.” — ECHOES AND DUST

On April 24, home of all things riff-heavy and rapid-fire rock Ripple Music will release the new live EP High and Alive from high-octane San Francisco American metal purveyors THE WATCHERS.  Following their 2018 album Black Abyss, the new EP delivers a searing performance recording of the band laying down their signature blend of stoner-doom with flourishes of thrash and riff-metal from across the spectrum of heaviness history.

Recorded live at the House of Rock in Santa Rosa last September, High and Alive captures The Watchers doing what they do best – burning down the stage with jaw-dropping musicianship and infectious heavy anthems.

Says singer Tim Narducci, “We’ve always wanted to record the band in a live setting. The energy and interpretation of the songs are a bit different every time we step on stage, and anything can happen.  High and Alive was an excellent evening of heavy and in the right setting. We were fortunate to have captured this particular performance.”

“A burly mix of classic doom a la The Obsessed with some melodic sludge in the vein of Corrosion of Conformity. It’s heavy stuff, but with massive hooks and soaring anthems.” — TREBLE

“Well-versed in the enigmatic ways of heavy rock, packing an onslaught of massive riffs and twists that take the listener through a heady and heavy musical trip.” — BLABBERMOUTH

Engineered by Evan Alexander and Harry Gale with mixing and mastering by Tim Narducci, High and Alive will be released on digital formats from Ripple Music on April 24th. 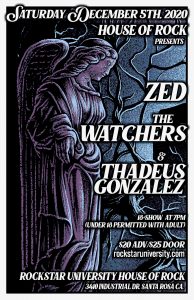